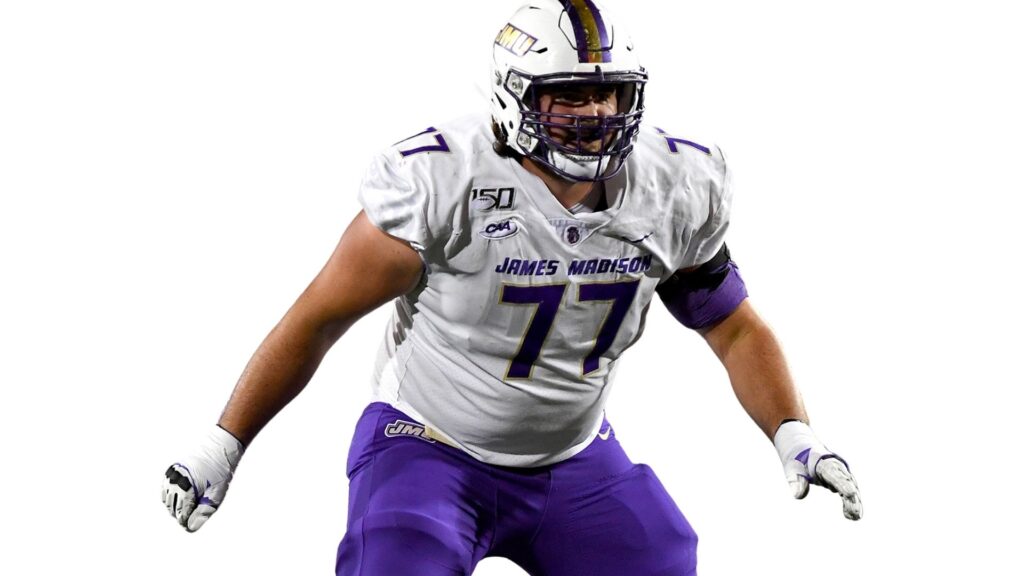 Scouting Report: Played in 54 games during his career with 41 starts (31 at RT, eight at LT, and two at RG)…finishes and doesn’t quit…competitor with a positive attitude and leadership traits that coaches admire…anchors well and plays with the low center of gravity and natural bend to seal the inside lanes…has violent hands with hustle to close off bubble screens and lead to flatten linebackers…nasty demeanor and highly coachable…sells trap block and can turn to seal…fluid getting to and adjust at the second level…has the feet to adjust when he anticipates what’s coming…effective trapping and bends at the knees with adequate core strength to absorb the bull rush…can clear a path at the second level if he hits the target.

2017 as a Freshman: Played in all 15 games, making two starts at right guard… JMU Rookie of the Year… Part of an offensive line that helped JMU lead the CAA and rank 15th nationally in scoring (34.4)… Also ranked third in first downs (325), ninth in completion percentage (64.9), 22nd in pass efficiency (142.46 rating), 25th in rushing (194.3), and 30th in total offense (419.0)… JMU produced four games over 40 points, including a season-high 75… Ranked second nationally with a +23.3 win margin… Made first two career starts in FCS semifinal against South Dakota State (Dec. 16) and in NCAA Division I Championship game versus North Dakota State (Jan. 6).