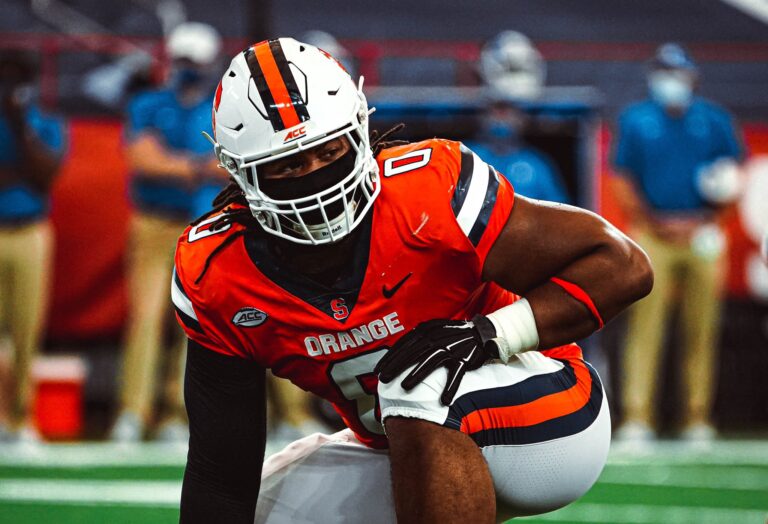 Scouting Report: Plays with lean and leverage against the run, tough for one man to move…provides some secondary interior pass rush, getting most penetration when playing three technique…lower than offensive lineman on every short-yardage play…good agility and ability to change direction for his size…can make the impressive chest-to-chest bear hug tackle in the hole due to his ability to wreak havoc in the backfield…plays with leverage at the point of attack whether inside or outside…keeps eyes in the backfield when inside…moves linemen to either side with strong hands.

Career Overview: Interior defensive lineman … One of the most physically-gifted players on the team (can do a back handspring) … In 61 games (34 starts) over six seasons, has 122 tackles (70 solo), including 21 for a loss, 4.0 sacks and one fumble recovery … 35 multi-tackle games … Redshirted in 2019 … Three letters.

Senior Year (2019): Played in three games at defensive tackle, carding eight tackles (four solo) and half a sack … Missed the first nine games of the season due to a foot injury suffered in preseason camp … Made his 2019 debut at Duke (11/16) and had a season-high three tackles, including a half sack … Tallied three stops the next week at Louisville (11/23) … Had two tackles against Wake Forest (11/30).

Junior Year (2018): Appeared in 12 games, starting nine … Recorded 17 tackles (nine solo), including three for a loss, and recovered a fumble … Collected multiple tackles in five contests … Tallied two tackles in the season opener at Western Michigan (8/31) … Posted a season-high three tackles, including a personal-best two for a loss, in the home opener the next week against Wagner (9/8) … Equaled his season best with three tackles at Clemson (9/29) … Recorded two tackles in Syracuse’s double-overtime win against North Carolina (10/20) … At Wake Forest (11/3), credited with one tackle and recovered the first fumble of his career, returning it seven yards … Tied his season high with three tackles, including half a tackle for loss, against Notre Dame (11/17).

Sophomore Year (2017): Played in all 12 games … Made five starts at nose tackle in a rotation with Kayton Samuels … Registered 25 tackles (15 solo), including four for a loss … Multiple tackles in seven games … Against Middle Tennessee (9/9), carded two tackles, including 1.5 for a loss … Three tackles, including a half tackle for loss, versus Central Michigan (9/16) … Logged a career-high four tackles in consecutive games at Florida State (11/4) and versus Wake Forest (11/11) … Three tackles in the season finale against Boston College (11/25).

High School: Coached by Lorenzo Davis … Named to the 2015 Miami Herald All-Broward County Second Team … As a senior captain, recorded 25 tackles, 14 sacks and one touchdown … Four-year member of the Dillard wrestling team … Posted a 37-8 record in his last two seasons, including a 20-5 mark as a senior.